In this debut newsletter – which I hope will be monthly – I thought I’d review what I read in April 2018. I long have envied a few dear friends who keep a reading list of books they’ve read – with notes and quotes that struck a chord. I’m more like several other friends in my book club take notes too but on post-its or the back of an old envelope – except I’m a reader who doesn’t take notes.

Inspired by above-mentioned friends, I tried to keep a reading journal. But transcribing the hunks of Charles Frazier’s Thirteen Moons that I felt compelled to capture? The tedious process defeated me – much as most resolute ambitions to maintain any type of daily journal (or blog) also battered me into indolence.

For some years, snapping a photo of books read served me well. And now I rely on Goodreads to maintain a running list – and accept it will never be a complete record. Alas. Even with this relatively easy record-keeping tool, I tend to forget books I pick up off the ‘new shelf’ at the library. Or I can’t be bothered writing the obligatory 20 words required for a Goodreads/Amazon review – despite how much I covet reviews of my own novel.

So now I embark on yet another attempt to record my reading history – for the month of April. I consult my Goodreads list, peruse the Kindle books on my iPad, and rummage through my faulty memory. Did I bring home library books? Hmmm… This list too is likely to be incomplete. Alas. But here’s the partial list – cut on my bias. 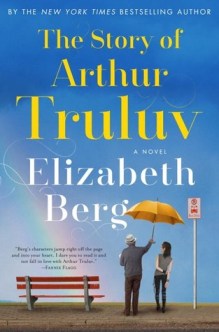 I began April with a sure bet. I’ve yet to read anything by Elizabeth Berg that I didn’t love. The Story of Arthur Truluv was right up there. Unlikely characters brought together in less likely circumstances muddle through mundane ordinary life. But Berg makes ordinary anything but. She mines day-to-day life to uncover the poignant, dire, and heart-grabbing meaning. Arthur is a genuinely dear man who somehow knows and values the stories behind headstones in the cemetery where he daily visits his departed wife. Arthur befriends teen mom-to-be Maddy and – even more surprising – nosy neighbor Lucille and creates a closely knit family to envy as he approaches his own permanent trip to lie beside his wife. Loved, loved, loved this book!

I was prepared to feel let-down after Arthur – but Angie Thomas brought me back up! In

the interest of full disclosure, I read this book back in January, but as it was my pick when I hosted my Really Read ‘Em book club in April, I did a quick re-read. However timely, I feared my friends might hate this story of a teen girl who witnessed the police shooting of her friend. To my surprise and delight, they loved it too. Starr’s family is so tight, so endearing, and with so much to teach us, and her friends – both in the ‘hood and the elite high school she attends – are wonderfully drawn in all their adolescent-ness. Thomas gives us a fresh and meaningful look behind news headlines into lives of kids and families who feel compelled to ‘have the talk’ about safe interactions with police – and their real and justified fears when doing everything right is no guarantee for your safety. This is an important book for our times – especially for privileged white folks like me.

For my other book club, I read Ken Follett’s volume 3 of the twentieth century, Edge of Eternity. After reading the first two, I confess I wasn’t looking forward to the third. I learned perspectives I never knew or considered – since my history classes always seemed to begin with the American Revolution and end at the brink of WWI. And this last one recounted what I might have learned in ‘current events’ had I been paying adequate attention. But there was a certain laborious nature to this learning that I found irksome. For one thing, the 1960s lasted through over 40% of this last volume, giving short-shrift to anything that came later. But I didn’t put my finger on why I kept finding other more interesting diversions until the question ‘What did you think of all the sex scenes?’ came up in our discussion. Yeah. That was it. The sex was gratuitous – and furthermore, redundant to the point of boredom. Overdone is a reasonable way to express my view of the sex and of Follett’s approach to historical fiction.

I try to mix in indie books – to support fellow indie authors and to learn. But as you may have noted above, I can be a harsh critic. I got bored by the pounding angst in the first few chapters of When Never Comes by Barbara Davis. Maybe I’ll get back to it – and maybe I’ll regret putting it aside. But when I know there are so many wonderful books out there, how can I justify sticking with one that bores me?

Greece, a place I’ve wanted to see since reading Mary Stewart in my teens (This Rough Magic, My Brother Michael). This one seemed over-ambitious to me. Five daughters all scatter from their village and have a series of rich but ultimately devastating lives – apparently because they left home. And then when broken, they finally return, all seems rather unbelievably lovely and well again. This one teemed with sex too, less irksome to me, but not especially compelling either. In the end, I wished there had been three daughters instead of five. It’s not that they were too alike; it’s that five stories were just more than what I wanted to read in one novel. I hope Manta keeps writing though, and I’ll read her next work in hopes she’s found an editor who helps her understand the rule of three.

And that’s it for April – or at least all I can remember. I was surprised at how few books I read last month until I realized that I only flew through the first two on my list. The others – including the monster-sized Follett – did not compel me to forget other things and read, read, read.

The good news for May is that so far, compelled is a mild word to express the obsession I have to read, read, read. If the trend continues, I’ll have a longer list to share in the May version of Salutations.