Yikes! Have I really not posted a Salutations since September last year? I could have sworn I had. Oh wait! I did write in November, but somehow it got stuck in my draft folder. I wonder if I meant to go back to edit, add a book or a photo. Beats me. It’s published now. Whew. I thought I was going crazy since I knew I’d written about some of those books I read last fall. Okay, the crazy verdict still hangs in the balance, even if this might not be a deciding factor.

And now you might get two posts in one day. Imagine. But don’t get used to it! The spring semester began today, and although I don’t have quite so many students as last fall, I’m still teaching three courses that will soon bury me in work. After this semester and a summer off, I’m dropping back to two courses and already the anticipation has me feeling less burdened.

I’ve read some dandy books to start off winter – and a few duds. Quite a few came from my library which often means I forget to include them on my Goodreads list. I’m a better reader than a record-keeper.

Here’s one I read last summer and one that will stick in my mind for a good long time.  During World War II, the US government created a secret town called Oak Ridge, Tennesee, and imported a legion of scientists and workers to populate the town and develop the nuclear weaponry of the Manhattan Project. The veil of secrecy, though necessary in the midst of war, had Draconian tones to it meaning that very few of Oak Ridge residents – the great majority of whom were young women – understood more than a tiny slice of their role in creating the atom bomb. Meanwhile, they lived, developed deep friendships and even romances in this new place not found on any map. It’s a well-researched story that reads like science fiction – as long-buried truths can do.

Jill Shalvis is a favorite author of a writing friend of mine, but if The Lemon Sisters is a representative sample, I don’t think I’ll be reading more. I didn’t hate this book, but I’m not likely to pull another off the shelf. If you’re a fan, I’ll listen if you want to convince me to give her another try.

Here’s another I got from my library’s ‘new shelf’ sometime last year. When a book club member floated the title as her December pick, I knew I’d read it already – but couldn’t remember much about it. Well into the second reading, the story had only vague familiarity. In the end, another book club friend described it well as a ‘nice little story.’ Not particularly consequential, but nice. I will say that I love the title and enjoyed learning the properties that some ascribe to various gems. If one believes a particular stone will give you courage, it makes sense that person will act courageously.

I seem to expect more from some titles and covers than I ultimately find. This one had a strong title, a great cover, and a disappointing story.  I’m not likely to get seduced by Maclean’s titles again. I looked forward to having this book behind me.

Sophie Kinsella, on the other hand, never disappoints. I laughed out loud as a doc gave the presumably good news that Sylvie and Dan could expect another 68 years together. I don’t care how in love you might be, eternity sounds so much less eternal than 68 long years! The scheme to plan ‘surprises’ to make the next one of those years endurable clearly foretold disaster as did Sylvie’s daddy-worship. But instead of being trite, Kinsella’s quirkily charming characters made the story a great ride.  Fun, start to finish!

While I liked the Lisa See books I read before, I remember finding them a lot of work. This one was too – and the work was worth it! I learned about tea and a remote part of China that even most Chinese in the novel seemed unaware of. Most telling, though, was what I learned in one chapter that recounted a group therapy session of Chinese-born teens adopted by Anglo-American parents. These troubled young women spoke of coping with pressures to please their adoptive parents, excelling in all things social and academic, and taking advantage of the opportunities they would never have seen in Chinese orphanages. They spoke of feeling grateful for the opportunities and angry with both the adoptive and birth parents. It was a fascinating story, told with enough human drama to keep those pages turning. A fair amount of work, yes, and a darn good read.

Christmas morning at our house always involves books because my guy begs for a list of my reading pleasures. I’m only halfway through that collection and have loved them all so far. Like Kinsella, Nora Roberts never disappoints. As is true with most of Nora’s books (interesting that I think of her in first-name terms) I can foretell what’s going to happen. And I don’t care. I still want to hang out with the people – except for the human beasts. In Under Currents, Nora takes on child and spousal abuse with all the requisite sex and banter one expects from Nora. Always fun!

I opened a second Nora on Christmas – this one the third in her Chronicles of the One series. I chose to re-read book two again before cracking book three since each of the volumes was published a year apart. No doubt I’d have started at the beginning except I got Year One from my library shortly after it came out in 2017. I don’t think you can count this series as typical Nora. For one thing book two includes no sex at all! I didn’t question whether evil would triumph over good this time, but I still had fun getting there. And I very much enjoyed observing how the community of New Hope formed under democratic practices and prepared to hand the reins to the next generation.

Elizabeth Berg rated two titles on my gift list too. I may not count Night of Miracles quite as dear as Arthur Truluv, but there was still plenty to charm. And really, how could you get dearer than Arthur? My most significant wish from this book is that Lucille’s caramel cake could leap onto a plate on my lap. I have high hopes for The Confession Club awaiting me and am enjoying the anticipation. You may as well too since that one will show up when I get around to posting next time. 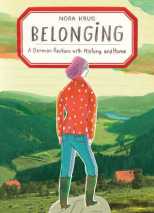 And the last for this post was my first experience with a graphic memoir. I have a lot of respect for Nora Krug’s artistic talent and for the research she did to come to terms with what she feared might be the sins of the grandfathers. Her cultural guilt as a German is a concept that escapes me. I certainly recognize the privilege I enjoy because of my European-American DNA, but to feel guilty for actions not my own seems precious and counter-productive. I did connect strongly as she spoke of the principle of Heimat – a strong connection to the place that helped form one. But overall, my reaction to this first graphic genre I’ve read? Interesting story. Annoying format that made the story physically difficult to read.

I’ve two more book club reads ahead of me, a Richard Russo from the library, and my remaining Christmas gifts. And a new semester that begins today. Stay tuned. I will be back in touch. But don’t hold your breath.